A week after the first game, Ted brought Will, Steve and I back to finish out the Assault on Kalukin scenario with the 'O' Group rules. Joining us was Chip, who wanted to check out the rules in action. 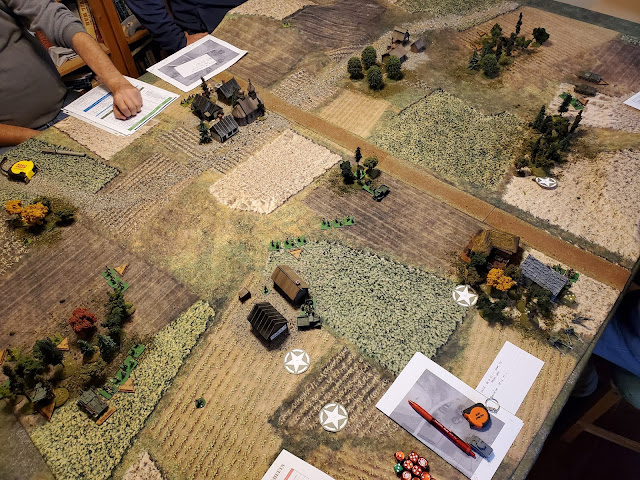 From last time, the Soviets had 16 turns to either capture two of the four sectors of the large village in the German's half of the table, or remove 12 sections from the German's overall force. We ended at turn 7 with the German down 5 sections and the Soviets down 2 (the loss from the Recon Platoon didn't count). 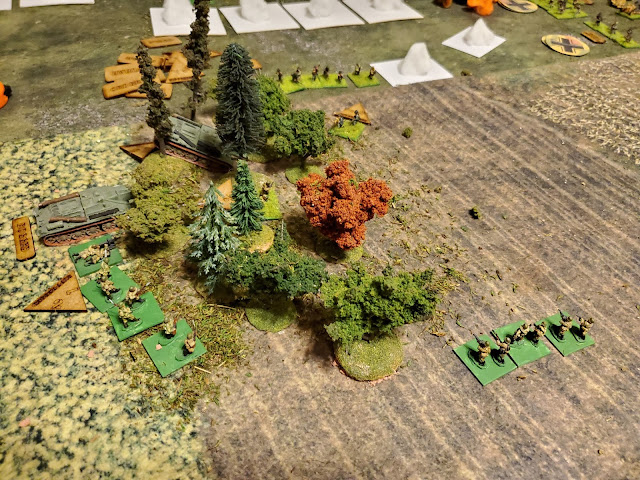 Forgetting that close combat assaults were a part of the rules, I ordered several platoons from A Company to fire at the lone panzerschreck team. While they were suppressed, Ted managed to save the section and kept A company stuck in the woods. 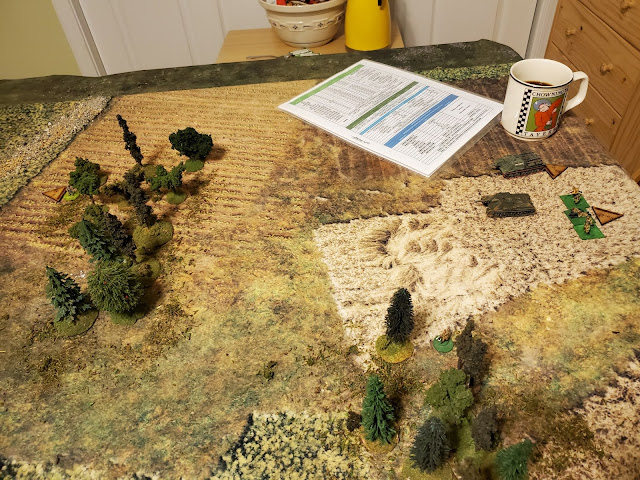 Meanwhile, B Company was hit with an artillery barrage and forced back. They could have stayed in place and taken the extra point of shock, but by falling back they would deprive the Germans of the accuracy bonus when firing artillery and mortars at the same location over multiple turns. 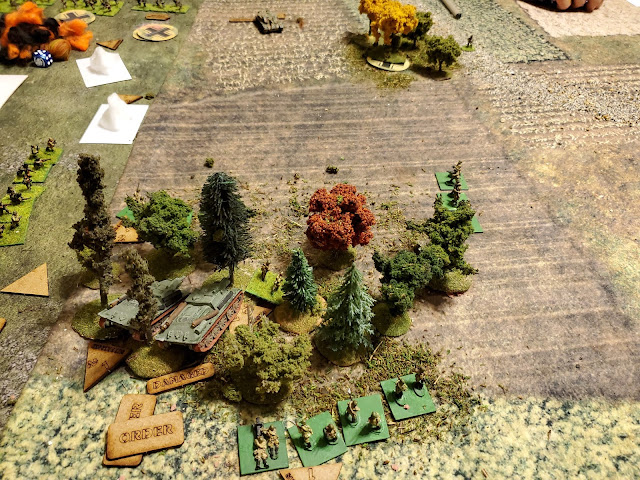 On the left flank, I ordered a platoon to charge the panzerschreck section and routed them. However, I then had to deal with the StuG platoon that was throwing rounds at A Company. With no ranged infantry A/T available, my only option was the platoon of SU-122s. which had several disadvantages when trying to fight other tanks. 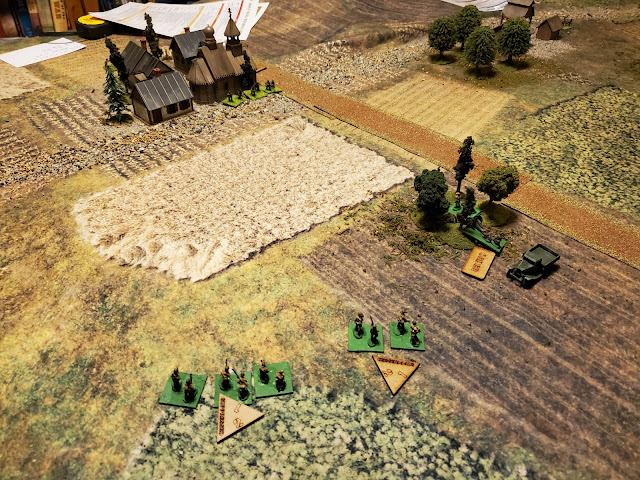 Ted also revealed a unit of German infantry in one of the BUA sectors of Kalukin. The infantry and machine gun fire, along with the Germans' supporting mortars, kept slamming into the poor infantry of C Company who were stuck out in the open fields.
However, revealing the infantry also meant that the Soviets had targets, so Steve and I subjected the Germans to mortar and light gun fire and removed a stand. 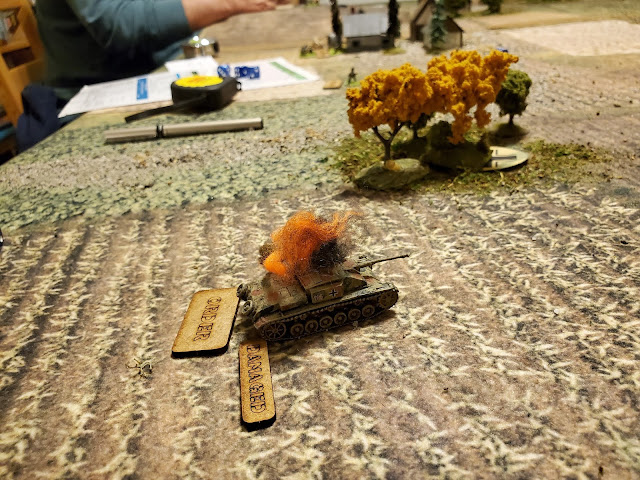 While the lone StuG platoon held up A Company, the SU-122s were eventually able to damage and then destroy the StuG platoon. 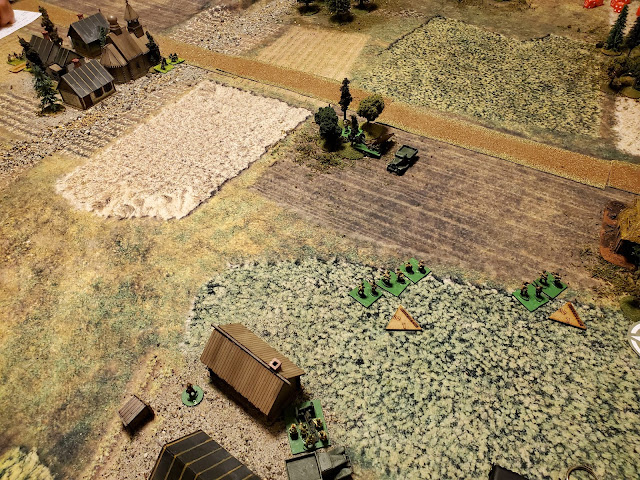 We also withdrew the infantry platoons in C Company. The field guns were in place and blasting away at the infantry in the town (you can see another section gone), and were supported by the mortars and artillery.
It didn't help the Germans that their FUBARs ended up giving them a Hesitant Company every other turn, and that by using their HQ Orders to try and counter the Soviets they ended up having less Company Orders to use in the next turn. 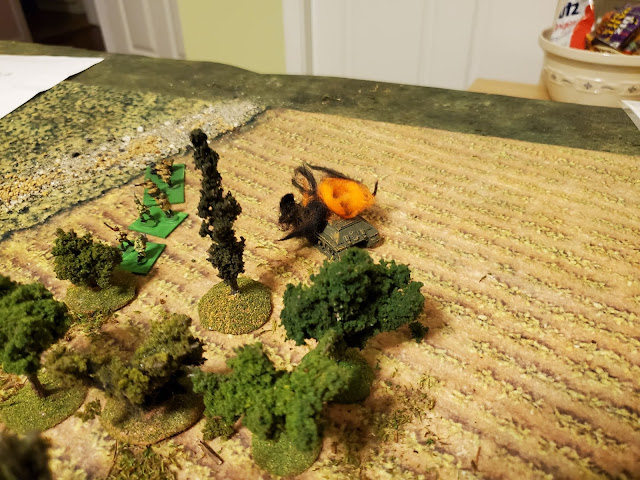 The Germans weren't going to go down without a fight. They rushed a Pak 40 up onto the high ground that their spotter had been using for the whole game and quickly ranged in on B Company, which Steve had pushed forward to chase after the retreating Germans. It was able to suppress the infantry and damage one of the SU-122s that was supporting B Company.
However, it was just a little after the loss of the SU-122 that the Germans ended up with their third FUBAR, after losing 12 sections. Since this was one of the two victory conditions, they ended up winning the scenario.
There was some good after-game talk, with the two sides discussing their plans and how well they went. I'd definitely like to try the scenario again on the German side. The Soviets had some severe restrictions (Rigid Reserves, less dice when firing and moving) that the Germans could potentially exploit if aggressive enough. Or, as Will suggested, the Germans may have faired better if they had hit the Soviets sooner, then retreated back to secondary positions.
Posted by Brian