Even poor weather isn't enough to stop a game of Guild Ball. With the rain pouring down outside, Kevyn and I met at Stomping Grounds for a rematch. 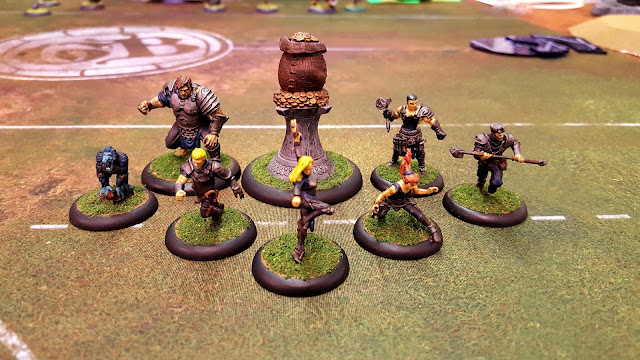 With more options than last week (fully painted, too!) we decided to play a 6v6 game. The teams for the match were:

The appearance of the Union player was worrying, as Unions substitutions are potential outliers for team dynamics. 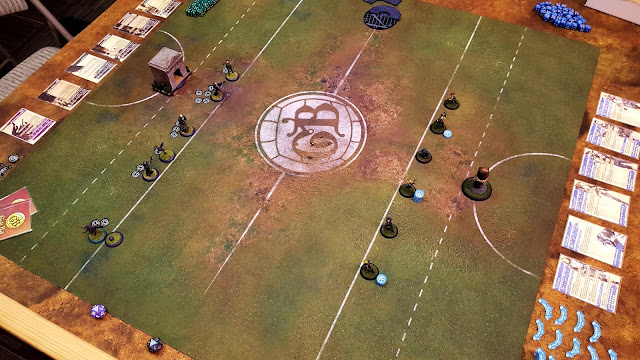 The game started when Mist kicked the ball onsides, and so it was given to Flint.

Players began to move forward. Tower made his way into the center of the field, hoping to use his ability to force another player to go last during a turn on Obulus, but he was out of range. Mist ran up, hoping to get an angle on the ball. Honor went next, moving closer to Flint and giving him both a 2" Dodge forward and the Superior Strategy buff (+1 Influence and another activation during this turn).

At that point, I thought I had screwed up. It was possible for Flint to score on the first turn, but I needed just a single point of Momentum to spend for the kick on the goal. Luckily, Dirge moved up and into's Flint's charge range. With that opportunity, the Mason's striker took off towards the Mortician's mascot. The dice roll allowed Flint to get his "Where'd They Go?" ability off, which resulted in a 4" dodge forward. Still out of range, Flint activated his "Super Shot" ability, giving him another 2" in range - just enough to reach the opposing team's goal. With a snap of his boot, the ball went sailing through the air and into the Mortician's mausoleum, making it 4-0 for the Masons.

The ball went back into the pitch (right after Flint dodged back to the center of the field) and landed at near Cosset, who passed the ball to Mist, who ran up the field. Flint and Marbles, lacking any Influence, moved up to intercept Mist, as Harmony ran up the empty left side of the field. 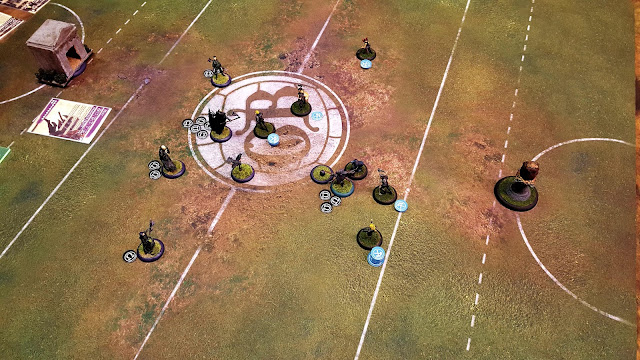 Having won the Initiative roll for the next turn, and realizing that Mist was in a bad position, Kevyn had the Union player dodge to the left, and sent the ball back to Silence. This was a mistake, however. Flint, refreshed with plenty of Influence, took the hit from Dirge's Parting Blow and ran over to Silence. Even with Obulus at his back, Flint took the ball from Silence and, with another usage of his "Super Shot" ability, managed to score another goal, setting the game to 8-0 for the Masons. The ball came back and landed in the Mortician's control.

Scoring, however, left Flint in the center of the Mortician's team, and he quickly went down, scoring the Mortician's their first points and making it 8-2. In retaliation, Honor went after Mist, quickly bringing the mercenary down to a point where a light breeze would knock him out. A plan was formed, and even as Flint's limp body was removed from the field, Tower, Marbles and Mallet all began to attack Dirge. This gave Silence the chance to launch a vial of Embalming Fluid into the scrum, setting the three Masons alight. 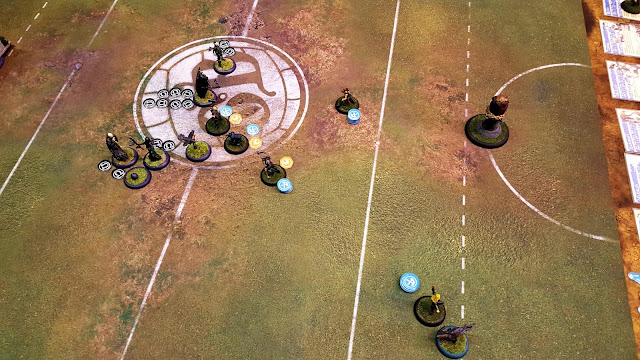 The next turn started with the Mortician's again, and Cosset quickly sent Tower down for a dirt nap (8-4). But then Honor went, knocking out Mist (10-4). Using their sisterly bond, Harmony then activated and sprinted between Marbles and Mallet, both of whom where trying to smother the flames. Sword flashing, the fiery redhead cut the Mortician's mascot out of the air, scoring two more Victory Points and securing the victory for the Masons, 12-4. 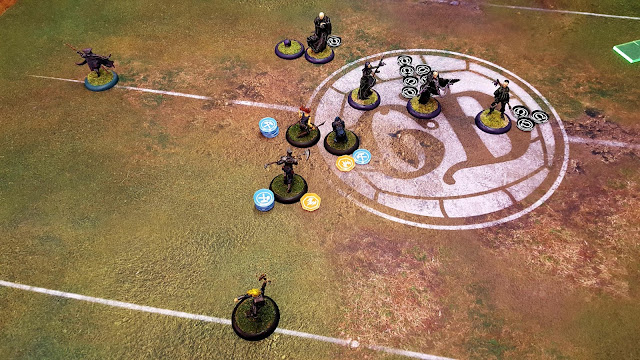 As for after game thoughts, it turns out that the Guild Ball community hasn't exaggerated when rating Flint as potentially the best offensive striker in the game. Two goals in as many turns not only put the Masons at a comfortable lead, but also gave the team two more Influence points to work with. My plan with Tower didn't pan out (he never got the chance to make Obulus go last), but as Kevyn point out, he did manage to hold up three of the Morticians players in the middle of the field. Harmony didn't do much as well, as most of the ball control for the Masons was done by Flint.

I'm still looking forward to getting Chisel (although it may take awhile for her to arrive in-store), and I'm beginning to think about potential additions from the Union, even though I should probably focus on learning how to use the in-faction models first. The choice I can really see at the moment is Mist, for another long-range threat for scoring alongside Flint.
Posted by Brian